Showing posts from April, 2017
Show all

Review: Text Analysis with R for Students of Literature (Quantitative Methods in the Humanities and Social Sciences)

Text Analysis with R for Students of Literature by Matthew L. Jockers
My rating: 5 of 5 stars

Engaging writing, with code samples and practices. As for programming, I thought the code quality was somewhat low or sloppy, but Jockers is not a software developer by trade. While reading, I did have a few ideas to solve some text-matching issues across systems, and generally, I found the lack of discipline in the author's approach conducive to flexible thinking about using techniques with R. 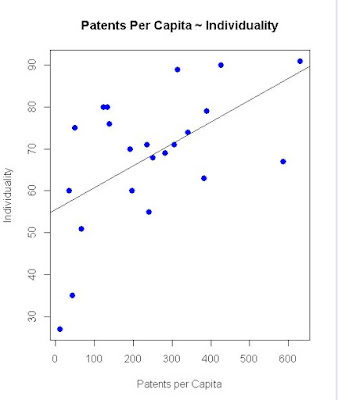 Thinking about social dimensions and innovation, it occurred to me that there might be a relationship with masculinity, but then quickly dismissed it, considering it much more likely to be predicated on science/math education. Even then, other cultural elements might be more likely correlated. What follows is an exploration of various correlations with patents per capita.

Although Hofstede's Cultural Dimensions did have a significant correlation with patents per capita, somewhat surprisingly, PISA scores by country, education, nor average IQ, had a strong relationship with patent production, although if Asia was included, statistically it would.

Notes:
I often exclude Asia from analyses, as the initial driver of this work was looking at cultures that are similar, to tease out social effects.That is also why I ignore looking at all countries, as some relationships across the entire world disappear when limited to just developed economies. As an example, the value of work and its ben…
Post a Comment
Read more
More posts